Startling statistics have revealed the magnitude of the global opioid epidemic. According to the World Health Organization (WHO), in 2018 about 58 million people worldwide used opioids, and another 35.6 million suffered from drug use disorders.1

Echoing these findings from the WHO, the International Journal of Drug Policy reports that the use of illicit opioids and misuse of prescription opioids are the main causes of drug-related deaths across the world, calling the continuing rise in opioid-related mortality a public health challenge that is especially affecting North America, Australia and Europe. The journal estimates there were 1.3 million high-risk opioid users in the EU in 2017, with 77% of them in Germany, Spain, France, Italy and the UK. Additionally, there were 9,461 overdose deaths in the 28 EU member states plus Norway and Turkey. Of these, 78% involved opioids.2This uptick in opioid use worldwide is a leading factor in the escalation of the conversations around – and the use of – nasally administered rescue drugs such as naloxone, and the efforts to ensure healthcare providers (HCPs), first responders, care networks and the general public are properly trained in their use.

In the US, an estimated 1.7 million people suffered from substance use disorders related to prescription opioid pain relievers in 2017, prompting the federal Department of Health and Human Services (HHS) to declare the nation’s opioid crisis a public health emergency. The agency cited increasing rates of opioid-related deaths and use disorders as the primary factors for this declaration. In 2019, almost 50,000 Americans died from opioid-involved overdoses.3

In addition to the overwhelming human toll, there is also an economic toll, including the costs of healthcare, lost productivity and addiction treatment. The US Centers for Disease Control and Prevention (CDC) estimates that the total economic burden of prescription opioid misuse in the US alone is $78.5 billion (£56.2 billion) a year.4

THE CHALLENGES OF NASAL RESCUE THERAPY DEVICES FOR OPIOID OVERDOSES

Naloxone is a life-saving medication that rapidly reverses the effects of opioids when administered via the nose and is considered a front-line defence in battling the opioid crisis.5 Efforts are underway to make this rescue therapy more readily available to individuals, families, first responders and communities to help reduce the number of overdoses and deaths.6 But the rescue therapy can only be effective if it is in the right hands, and those administering the rescue therapy know how to use the intranasal drug delivery device correctly.

According to the US FDA, an important element of continued efforts to increase the availability of this life-saving drug is to ensure that treatments are available first and foremost to two major groups: individuals at a higher risk of an overdose – which includes people with a history of substance use disorder – and those in communities who are most likely to witness an overdose.6

Essential to preventing opioid overdoses and deaths is increasing the availability of all forms of naloxone – including nasal sprays – to individuals most at risk, as well as to their care networks, first responders and others.

All forms of naloxone currently require a prescription, which can be a barrier for people who are not under the care of an HCP or are reluctant to admit having an issue with substance abuse and thus do not seek help. Some US states – as well as some countries in Europe, the Middle East and Africa – have passed laws allowing pharmacists to dispense naloxone under a standing order, which takes the place of an individual prescription, while others have given pharmacists direct authority to prescribe naloxone to consumers.6

Aptar Pharma’s Unidose systems are ready-to-use, one-step nasal drug delivery devices that deliver a precise single dose quickly, easily and reliably without the need for administration by an HCP. Aptar Pharma’s patented Unidose devices are approved by the FDA and European regulatory authorities for a wide range of treatments, from chronic conditions, such as migraine and vitamin B12 deficiency, to life-saving drugs that counter an opioid overdose, seizure clusters or epilepsy, such as naloxone, midazolam or diazepam. 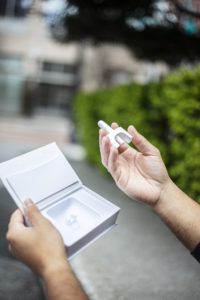 Noble, an Aptar Pharma company, offers medical device training solutions and patient onboarding strategies that are leveraged by biopharmaceutical companies and original equipment manufacturers (OEMs) to support patients who self-administer their prescribed medications – or, in the case of naloxone, for people who are at a high risk of needing someone in their care network to administer the drug to them to counteract an opioid overdose.

Noble has designed a training device that replicates the form and function of Aptar Pharma’s Unidose device while also featuring a novel twist reset function that allows for repeated practice and makes it easier for users to become familiar and comfortable with actuating the device. Noble’s nasal delivery device training kit also includes training device instructions for use (IFUs) to empower patients and engage care networks with the knowledge and confidence to administer the actual drug therapy in an emergency (Figure 1).

Recently, Aptar Pharma and Noble entered a collaboration with dne pharma, a leader in addiction medicine in Northern Europe. The companies are providing Aptar Pharma’s Unidose drug delivery device and Noble’s training solution for dne pharma’s Ventizolve® nasal naloxone, which is currently approved in 12 countries across Europe. Noble’s training kit will be used as part of dne pharma’s broad patient onboarding and awareness programme for Ventizolve in outreach and drug treatment centres across the Nordics – the first of its kind for a naloxone nasal drug product launch (Figure 2).

According to dne pharma, the inclusion of Noble’s training device with dne pharma’s Ventizolve nasal naloxone will help broaden the impact of its life-saving treatment.

A 2019 study solidified that intranasal administration in general – and thus naloxone as well – has several advantages over intramuscular administration of medicine. Intranasal administration removes the possibility of needlestick injury and, more importantly, administration through injection often requires more training and practice than is necessary with nasal drug delivery.7 Additionally, nasally administered medications are widely recognised in the rescue therapy space, as they are quickly absorbed by the nasal mucosa, passing the blood-brain barrier more rapidly than other forms of administration.

These reasons, among others, explain the benefits of nasally administered rescue therapies. Additionally, because overdoses can happen anywhere and at any time, the FDA sees nasally administered naloxone as a preferred treatment, due to the fact that it is designed so that anyone can use it. “With naloxone, anyone can help save the life of someone who’s having an opioid overdose,” said Douglas C Throckmorton, MD, Deputy Director for Regulatory Programs at the FDA’s Center for Drug Evaluation and Research. “We want everyone who may witness an opioid overdose – family members, friends, neighbours and others close to people who use opioids – to have access to naloxone and to feel confident using it during an emergency. Without naloxone, the risk of an overdose being fatal is significant.”8

The greatest benefit of nasal rescue therapies – the fact that they are created so that anyone (a person’s care network or the public, for example) can administer them – is also one of their greatest challenges. When faced with an emergency, will users have the confidence and knowledge to administer the rescue treatment?

Training helps to reduce use errors and can also aid in addressing user anxiety. In 2014, Noble conducted research with 55 participants in conjunction with Auburn University (AL, US). Data showed that practising with a training device prior to self-administering (or, in the case of naloxone, teaching a care network to administer) results in an 86% increase in user confidence.9

Furthermore, when people are trained in the proper use of nasally administered rescue treatments and confident in training others, they – and those around them – are better prepared for a potential emergency.

Furthermore, training the public in the use of nasally administered rescue treatments, such as naloxone, is critical. But if that life-saving drug is not on hand in an emergency, that training cannot be acted upon. This lack of access to these drugs creates a secondary problem: ensuring naloxone is in the right hands and in the right communities.

As with all products that place the burden of administration in the hands of the user, proper training and onboarding helps to build user confidence, which in the rescue therapy setting can be a crucial factor. A training kit that includes a resettable demonstration device – precisely as is included in the Noble training kit for Aptar Pharma’s Unidose device – can help to ensure a high level of user confidence in what will be unscheduled, stressful and potentially life-threatening circumstances.

Minimal access to naloxone is a barrier to mitigating the often-deadly impact of opioid overdoses as well. In most countries, access is limited to HCPs and, even then, that access can still be inadequate. Recently, the UK, Canada, Australia, Italy and others have made these drugs available over the counter. While this is a powerful first step, it means training becomes even more essential to ensure that users accessing these over-the-counter drugs are prepared to properly administer them.1

Nasally administered rescue treatments, such as those delivered using Aptar Pharma’s Unidose system, are critical contributors to helping solve the global opioid crisis. When combined with Noble’s Unidose training kit, people at high risk of an overdose can train and prepare their care network in the proper administration of the life-saving drug. In the best-case scenario, the rescue drug will never be used; however, should a situation arise where it must be, users should feel confident in administering it to save a life – which begins with simply understanding how to use the drug delivery device quickly and effectively.